This summer, with the generous help of a lot of people , I spent 3 weeks in Namibia in southern Africa as part of a group of 18 students from Queen Elizabeth Sixth Form on a ‘World Challenge’ expedition, to help the local people and 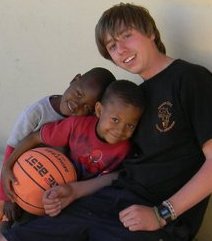 environment. I had an excellent time and know that my work made a difference. We did two main projects, including conservation work in Waterberg Plateau National Park which consisted of moving heavy rocks to repair waterholes, to allow better access to the wide variety animals in the park, especially the giraffes that were breaking their ankles on the damaged edges to the water holes. We also spent time refurbishing a campsite so the locals could get revenue through tourism, which made a big impact as on the day we left they were able to take bookings for
later on in the season.

Our second project was in a local school, where we were the first group ever to visit. The children were mainly orphans, many losing their parents through AIDS. I was struck by the lack of basic items, such as bowls and cups.
The children would queue for food and then eat quickly so that they could lend their bowl to someone else, as no bowl meant no food. They were desperate even for the coke cans we had brought from the Capital, getting them out of the rubbish pile after we threw them away to use as drinking cups. In the week we were there we built a climbing
frame which they loved and did lots of decorating as their classrooms and dormitories had no pictures on the walls.
I was responsible for lots of the large murals and drew a large globe and painted some games on the walls and floors. We were also thrown in the deep end and expected to teach a whole class lessons. One lesson I taught was how to do
the hokey cokey which they really enjoyed!

Many thanks to everyone that helped me raise the money needed, especially to the Parish magazine for their donation and to those that sponsored me, bought a ticket for the Wayne Rooney shirt, gave clothes in the Bags2School, or attended the fundraising garden party. A special big thank you to the Cockin Trust for their kind donation and to my employer, The Stanwick in Aldborough and the Black Bull in Melsonby for allowing the Rooney shirt to be displayed for several months.

On a personal level I grew a lot from the amount of independence we were given including control over the
projects we wanted to do , the budget, food and accommodation and experiencing  being the Leader of the group. Seeing a very different environment was a brilliant experience and I now have a new found respect for simple things such water, as the village had no running water and ran out on one of the days we were there. Overall a brilliant, worthwhile experience where I feel I made a difference.  Many thanks to everyone in Melsonby and surrounding villages and my family and friends who have helped me 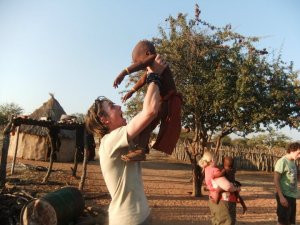